The Royal Government of Cambodia has made several important steps to protect the rights of Cambodian domestic workers here and abroad.

Mr. Frank Viault, Head of Development Cooperation of the EU Delegation to Cambodia

Domestic workers make an enormous contribution to the economy and well-being of society.  By supporting their own families through their wages, domestic workers’ labour enables broader economic development.  How?  Domestic workers allow women and men, all of us, to work outside the home, by looking after the essential care work – cooking, cleaning, care for children and elderly people – that has to be done every day to enable us to survive and thrive.  Many of us in the room today could not possibly pursue our careers without the support of a domestic worker.

Historically, care work is regarded as part of a woman’s role in society and it is rarely valued or counted.  The same invisibility and lack of value often underlies social attitudes to domestic workers.  However, ILO Convention 189, which we celebrate today on Domestic Workers Day, makes clear that domestic workers are workers like any others and have the right to the same protections as those who work in factories or offices.

This is a good start and more needs to be done, particularly to better understand the conditions of work.  We know that domestic workers are primarily in private homes, which unfortunately bring particular vulnerabilities.  Domestic workers can be isolated and invisible.  And we do not have comprehensive data on their situation.  However, the qualitative research that has been done on the situation of female domestic workers in Cambodia revealed important findings:

One, many of the women received very low salaries,

Three, they lacked the privacy and safety of a lock on the door of the room where they slept,

Four, they lacked opportunities to interact outside the home and felt that if abuses happened in the workplace they would not dare to report to authorities.

In some cases, women reported that they had been employed since childhood, did not receive any cash wages or were expected to work for nothing in the employer’s business.  Others reported verbal abuse, sexual harassment, violence and rape.

Here in Cambodia there is still more to do to ensure that domestic workers are not left behind and can realise the same rights and protections as other workers:

Second, seriously consider the ratification of ILO Convention 189.  The Ministry of Labor and Vocational Training (MOLVT) has already done significant work on the roadmap for ratification through a tripartite plus process. This process included consultation with key stakeholders including workers’ networks and organisations and already resulted in the Prakas on conditions of domestic workers.  The UN (ILO and UNW) supported this process and stands ready to continue to support preparation for ratification of the Convention.

The UN is committed to support social protection frameworks which we see as an important measure for realizing the Agenda 2030 objective of Leaving No One Behind.  We look forward to identifying opportunities to support the rollout of social protection to domestic workers including through innovation.

Leaving no one behind means prioritizing human rights and dignity and bringing marginalised people to the forefront.  In Cambodia female domestic and other migrant workers are among the groups at risk of being left behind and though notable progress has been made, more work remains to be done. As the UN System in Cambodia we aim to contribute to efforts to advance women migrant workers’ rights through a new project called Safe and Fair, realizing women migrant workers’ rights and opportunities in ASEAN implemented through a partnership between ILO and UN Women.  Safe and Fair is part of the EU-UN Spotlight Initiative to eliminate violence against women and girls - a global, multi-year initiative between the European Union and the United Nations. In closing, I would also like to take this opportunity to thank the Royal Government of Cambodia, the EU delegation in Cambodia as the funding partner of this event along with Solidarity Centre, development partners, UN colleagues and all stakeholders for your efforts in improving the welfare and protecting the rights of domestic workers. I look forward to our continued collaboration in this important effort. 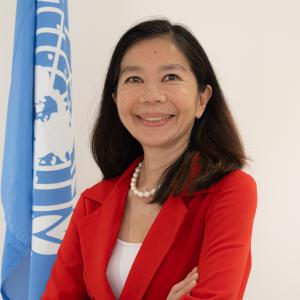