The Resident Coordinator(RC) is the leader of the UNCT and plays a central role in making possible the coordination of UN operational activities for development at the country level in support to national priorities and capacity building. As the designated representative of – and reporting to – the Secretary-General, the RC ensures effective advocacy of the core values, standards, principles and activities of the UN system.

The UN Resident Coordinator in Cambodia

Mr Joseph Scheuer has been appointed as the new United Nations Resident Coordinator to Cambodia. He took up his post on 1st October.

Mr. Scheuer brings more than over 25 years of experience in international development. He served in various complex country contexts and has extensive experience in accompanying countries towards the achievement of the Sustainable Development Goals.

Prior to his appointment as United Nations Resident Coordinator, Joseph Scheuer served as United Nations Development Programme (UNDP) Resident Representative in Mali. He led the roll-out of a new country programme in partnership with other UN entities in support of the rule of law, institutional and electoral reform, stabilization, climate security and durable solutions.

Mr. Scheuer held several senior positions with UNDP as Director for Climate Change (2015-2019) and Global Coordinator for Disaster Risk Reduction and Recovery (2012-2014) at Headquarters in New York. He served as Country Director in Cambodia (2007-2010), Deputy Country Director in India (2004-2007), and Coordinator for regional policy and programme support for South Asia based in Nepal (2001-2004). Earlier in his career, he served in Headquarters, Papua New Guinea and Nigeria (1994-2001).

Prior to joining UNDP, Mr. Scheuer worked in Luxembourg for a consulting company on environmental issues.

Mr. Scheuer holds a degree in Applied Physical Geography from the University of Trier in Germany, with a specialization in climate science from the Federal Polytechnic Institute in Zürich, Switzerland. 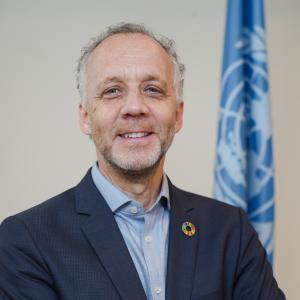